Whooping cough, also known as pertussis, is a highly contagious bacterial infection in the lungs. The most common symptom is an uncontrollable, hacking cough. After coughing, a person with pertussis usually needs to take deep inhales, resulting in a “whooping” sound, which gives the condition its name.

What Is Whooping Cough (Pertussis)?

Whooping cough (pertussis) is a respiratory tract infection that can affect all age groups, but occurs most commonly in infants and children. Adults who contract pertussis usually experience symptoms that are more mild. In fact, doctors may misdiagnose pertussis symptoms in adults as asthma or bronchitis.

The pertussis vaccine can help prevent you from getting whooping cough, though it isn’t 100% effective.

Someone infected with whooping cough can be contagious for up to three weeks after they begin coughing.

While pertussis symptoms can initially resemble a cold or even the flu, symptoms begin to worsen after a week or two. Severe coughing fits, some of which can last a couple minutes, begin. The fits are interrupted and/or followed by gasps for air. The whooping sound is less common in babies and children, who might gag or, in some cases, temporarily stop breathing.

While adults and children can usually treat whooping cough at home, infants are more likely to require hospital treatment because of the severity of symptoms and potential for complications in that age group.

Antibiotics are used early in diagnosis to kill the bacteria responsible for pertussis and prevent someone from becoming contagious. However, if the disease is diagnosed too late, antibiotics may or may not be prescribed. If they are prescribed it is to prevent the spread of the bacteria or becoming someone who is a carrier of the bacteria, not to treat the illness.

Treatment options for whooping cough are:

At-home treatment for whooping cough can include:

The whooping cough vaccine can help prevent all age groups from contracting the disease. Infants receive the DTaP (diphtheria, tetanus, pertussis) vaccine on a schedule starting at two months old. Once the vaccine series is complete a booster must be readministered every six to ten years to continue protection. Even adults who are around young children should have a booster regularly. Side effects of the vaccine are notably mild, and can include redness, tenderness, and in some instances, a fever.

You should seek immediate medical attention if you’re experiencing symptoms and non-stop coughing fits are causing:

You should also see a doctor immediately if your child:

Related conditions to whooping cough include:

Infants who are under one year and are either unvaccinated or haven’t received all their vaccines are also very vulnerable.

Are you wondering if your coughing symptoms are actually whooping cough? Using K Health’s virtual diagnosis AI will help you assess if the symptoms you’re experiencing are more serious and may require medical attention and treatment. Download K, then check your symptoms, explore conditions and treatments, and chat with a doctor in minutes if needed. K Health’s AI-powered app is HIPAA compliant and based on 20 years of clinical data. 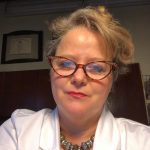 Want relief from your coughing?