What Is a Nose Bleed? What Causes Nose Bleeds? How to Stop A Bloody Nose How to Prevent Nose Bleeds Risk Factors and Complications When to See a Doctor How K Health Can Help
Share:

Table of contents
What Is a Nose Bleed? What Causes Nose Bleeds? How to Stop A Bloody Nose How to Prevent Nose Bleeds Risk Factors and Complications When to See a Doctor How K Health Can Help

Your nose is home to many blood vessels. Because of this, and the fact that noses protrude from the face, noses are a target for trauma. Therefore, they are prone to bleeding.

While nose bleeds can be frightening, they’re common in both children and adults. In fact, most people have at least one nose bleed in their lives. Luckily, the vast majority of nose bleeds are manageable and do not require a trip to the doctor’s office.

Though a nose bleed is seldom a serious medical condition, recognizing what causes it, how to treat and prevent them, and when it’s appropriate to see a doctor can leave you feeling more prepared the next time you’re faced with one.

What Is a Nose Bleed?

While there are many factors that can contribute to a nose bleed, most cases originate from the combination of dry nasal passages and some type of trauma—even trauma as innocuous as nose-picking.

Anterior nose bleeds can happen quickly after dry nasal membranes crack. You may be more susceptible to these types of nose bleeds in dry climates or in dry central heating when indoors during the winter. Other common causes include:

A posterior nose bleed is the result of damaged tissue or artery branches in the back of your nasal cavity. The arterial damage often leads to more bleeding than an anterior nose bleed.

Causes of posterior nose bleeds include:

Anterior and posterior nose bleeds share many common causes stemming from trauma and irritation. General causes for both types of nose bleed also include:

How to Stop A Bloody Nose

Here’s a step-by-step guide on how to stop a bloody nose at home. This method is effective for most cases of occasional nose bleeds. If you are unable to stop a nose bleed on your own following these steps, if your nose bleed lasts more than 20-30 minutes, or if you taste blood in your throat, see your doctor as soon as you can.

In addition to this method, you can also apply a cold compress to the bridge of your nose to help seal off the small blood vessels. Nasal sprays like oxymetazoline (Afrin) can act as short-term solutions for minor bleeding and congestion, but do not use them for more than a few days in a row, since they could lead to worse nose bleeds over time.

If the severity of your nose bleed necessitates a trip to the doctor’s office, treatments may include chemicals or tools that seal off the blood vessels in your nose. Your doctor might also use special nasal gauzes, sponges, or balloons to stop the bleeding, or employ hot water with special tools to soothe irritation and cleanse your nasal cavity.

How to Prevent Nose Bleeds

Medications that contribute to drying your nose can put you at a greater risk for nose bleeds, like antihistamines or decongestants. Meanwhile, medications that interfere with blood clotting—like aspirin, ibuprofen or anticoagulants—don’t necessarily increase your chance of having a nose bleed, but they could influence your body’s ability to stop one quickly once it begins.

If you are taking any of these medications and experiencing nose bleeds, consult with your doctor before stopping them, so you can properly assess their benefits and risks. Children and adults over 65 are more likely to get nose bleeds, as well as those who are pregnant due to a shift in hormones.

Anxiety and stress are risk factors for nose bleeds, but their connection isn’t necessarily direct. Instead, these conditions may trigger behaviors that lead to nose bleeds, like picking your nose or blowing it more frequently.

Nose bleeds in children ages 3-10 are common, since nose picking can agitate dried out nasal membranes in the nose. Prevention for children relies on many of the same actions as nose bleed prevention for adults, but also includes trimming your child’s fingernails to discourage—or minimize the damage from—nose picking.

Most nose bleeds are not serious; only approximately 10% require medical attention and treatment. If you experience a nose bleed that lasts longer than 20-30 minutes despite applying pressure, see a health care professional as it could indicate you have a posterior nose bleed.

If your nose bleed follows an injury like a car accident, seek emergency medical care, especially if you fear your nose is broken; this could be a sign of internal bleeding.

See your doctor if you experience chronic or frequent nose bleeds–or those that occur four or more times per week. They’ll help determine the cause of your nose bleeds, and help rule out if it points to an underlying health issue.

If you have questions about your nose bleeds, talk to a doctor. Did you know you can get affordable primary care with the K Health app? Download K to check your symptoms, explore conditions and treatments, and if needed text with a doctor in minutes. K Health’s AI-powered app is HIPAA compliant and based on 20 years of clinical data. 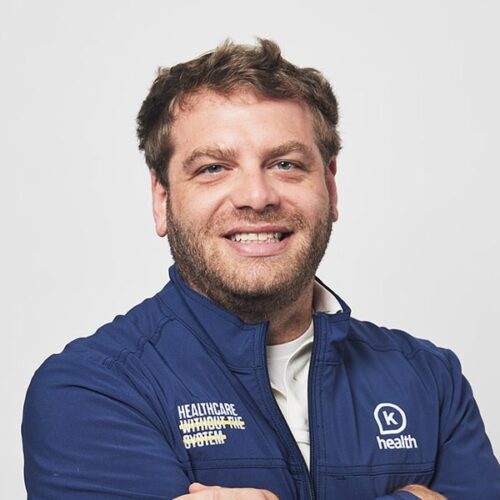 Dr. Morley specializes in emergency medicine and received his medical degree from the Sackler School of Medicine in New York City. He completed his residency at Thomas Jefferson University Hospital.