Sitting eerily in the basement of Jacobi Medical Center in the Bronx, New York, where I did my residency, are iron lung machines- relics from the pre-polio vaccine days. Before the advent of Salk and Sabin’s revolutionary vaccine in the 1950s, approximately 15,000 children were paralyzed by the polio virus every year in the United States. Immobilization of the diaphragm resulted in an inability to breathe. Children depended on these bulky negative pressure machines called ‘iron lungs’ to expand and contract their chests, mechanically delivering life-giving oxygen.  There was no reprieve. This was a life sentence. Mass vaccination eradicated polio in the US by 1979. Prior to that time, every summer when the virus was most prevalent, parents held their breaths in anxious apprehension.

Even as recent as the 1980s, kids with serious bacterial infections caused by haemophilus influnzae– h. flu for short—landed in the office of one of my mentors who recognized the disease the moment he saw the listless body of an afflicted child. Prior to public availability of the vaccine in the late 1980s, meningitis caused by h. flu presented ominously to clinics and emergency rooms every winter. Annually, 20,000 children fall ill and 1000 die. Survivors routinely suffered the loss of hearing, vision, and neurocognitive deficits.

For most of history, until relatively recently, in fact, humanity lived amidst the omnipresent threat of incurable infection that killed thousands and even millions of people. The bubonic plague of the 14th century decimated approximately 60% of Europe’s population within a 5 years span. In the United States, annual infection-related deaths dropped between 1900 and 1980 from 797 per 100,000 to 36. The average life expectancy at the turn of the 20th century was about 45 and at the onset of the 21st, 76. This was largely due to the emergence of antibiotics and vaccines in addition to other public health measures.

Despite vaccines’ contribution to our longevity and improved quality of life, in my own clinic, I converse routinely with many vaccine-hesitant or vaccine-refusing parents. Never for a moment do I doubt the parents’ best intentions. Like myself, parents seek to protect their children. They are appropriately skeptical of any intervention- especially an invasive one- that purports protection against an invisible enemy, one they themselves have never witnessed. Without an appreciation for historical context, it’s easy to forget both how fortunate we are and how tenuous our circumstances are.

On July 15th the WHO printed a report revealing that 23 million children missed out on routine vaccines and health maintenance visits during the pandemic. In the US, the CDC corroborated this finding and while the decreased vaccination rate was higher in the earlier months of the pandemic, many children still remain behind on their vaccines despite the rebounding in-office visits. Even prior to COVID, vaccination rates against diphtheria, tetanus, pertussis, measles, and polio had decreased globally. Exacerbated by the diversion of resources to combat COVID, there is a real concern that these diseases will re-emerge as herd immunity thresholds are breached.

There are a number of tactics that I employ when conversing with parents who have questions about vaccines. I discuss a collective responsibility to protect the vulnerable. There’s a poster on every exam room wall I reference illustrating the pathology of the various vaccine-preventable diseases. I address concerns about ingredients added to vaccines to increase their immune potency and shelf-life. I reorient parents to the meaning of ‘safe,’ a misnomer since every intervention comes with a risk versus benefit calculation.

But the drama of COVID provides a far more effective tool for combatting vaccine hesitancy and refusal than any poster or theoretical discussion.  Over the past year, in a remarkably short span, we have witnessed the devastation of a virulent disease but also technology’s anecdote. We no longer live under the illusion of invulnerability. We are more realistic regarding the unpredictable risk of new infections but also have a new appreciation for the science that permits our return to normalcy.

I’m candid with all parents. There’s no such thing as a completely safe intervention. Everything has associated risks. But thankfully we live in a time when effective treatments that pose a minimum risk and allow us to resume our lives can be developed rapidly. Most of history wasn’t so lucky. The re-emergence of other vaccine-preventable diseases that our predecessors worked so hard to eradicate would be both tragic and avoidable. Fortified now with a vivid illustration of the pre-vaccine world, the lived experience of COVID should energize vaccination efforts rather than hinder them. Iron lung machines should remain exactly what they are, relics. 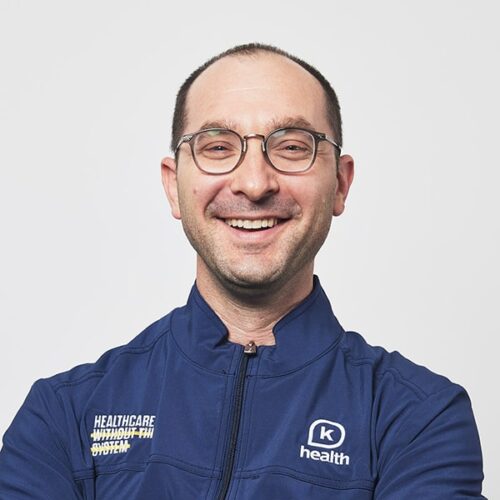 Dr. Shafran is a board-certified pediatrics physician. He joins K Health from the Cleveland Clinic, where he led a pediatrics practice and completed a fellowship in transplant ethics. He has completed multiple fellowships, including one in pediatric nephrology at Rainbow, Babies & Children's University Hospitals. He received his medical degree from the Sackler School of Medicine in Tel Aviv and completed his medical residency at the Jacobi Medical Center.

Everything You Need To Know About Fatigue After COVID-19

For some patients, the health effects of COVID-19 did not end when they passed through the initial, most acute, stage of their viral infection. Doctors now recognize that some patients can experience lingering fatigue from their bouts with COVID-19, even if their original experiences with the disease were mild or moderate. Some patients are reporting […]

How Much Does a COVID Test Cost?

Whether you have symptoms, were exposed, or just need to be cleared for an event, you are most likely among the millions of people who have questions about COVID-19 testing. Where do you get the COVID-19 test done, how fast are the results, and how much do they cost? While some tests are expensive, with […]

Have you heard the news about the new “stealth” subvariant of Omicron, or about Deltacron? Should we be worried, or is this just fear-mongering? The COVID-pandemic has pushed several scientific areas into the limelight, and forced all to brush up and remember our biology 101. Preliminary scientific findings which in the past were mainly communicated […]

In some areas, home COVID-19 test kits are all but impossible to find in-store. But the USPS is offering them for free, find out how to get yours now.

Ask the Expert: Could Omicron Signal the End of the Pandemic, and Start of an Endemic?

The beginning of 2022 marks two years to the early media reports of a new SARS-coronavirus outbreak. In these past two years, we’ve witnessed a global and concerted effort to develop successful vaccines and treatments for the new disease with unprecedented speed. We’ve also experienced much frustration and confusion due to failed and erroneous predictions, […]

Testing for COVID is vital to helping reduce the spread of the SARS-CoV-2 virus. Whether you’re experiencing symptoms, were exposed to someone with confirmed COVID, are following workplace guidelines, or taking precautions before traveling or visiting immunocompromised friends and loved ones, COVID tests remain an important public health resource. Both vaccinated and unvaccinated individuals can […]

In recent weeks, the CDC has expanded eligibility and updated the recommendations for COVID-19 vaccine boosters. The CDC now recommends that everyone aged 18 and older should get a booster shot, 6 months after completing the primary mRNA COVID-19 vaccination series. These recommendations have become especially pertinent with the renewed and rapid rise in the […]