GET A REMERON (MIRTAZAPINE) PRESCRIPTION ONLINE 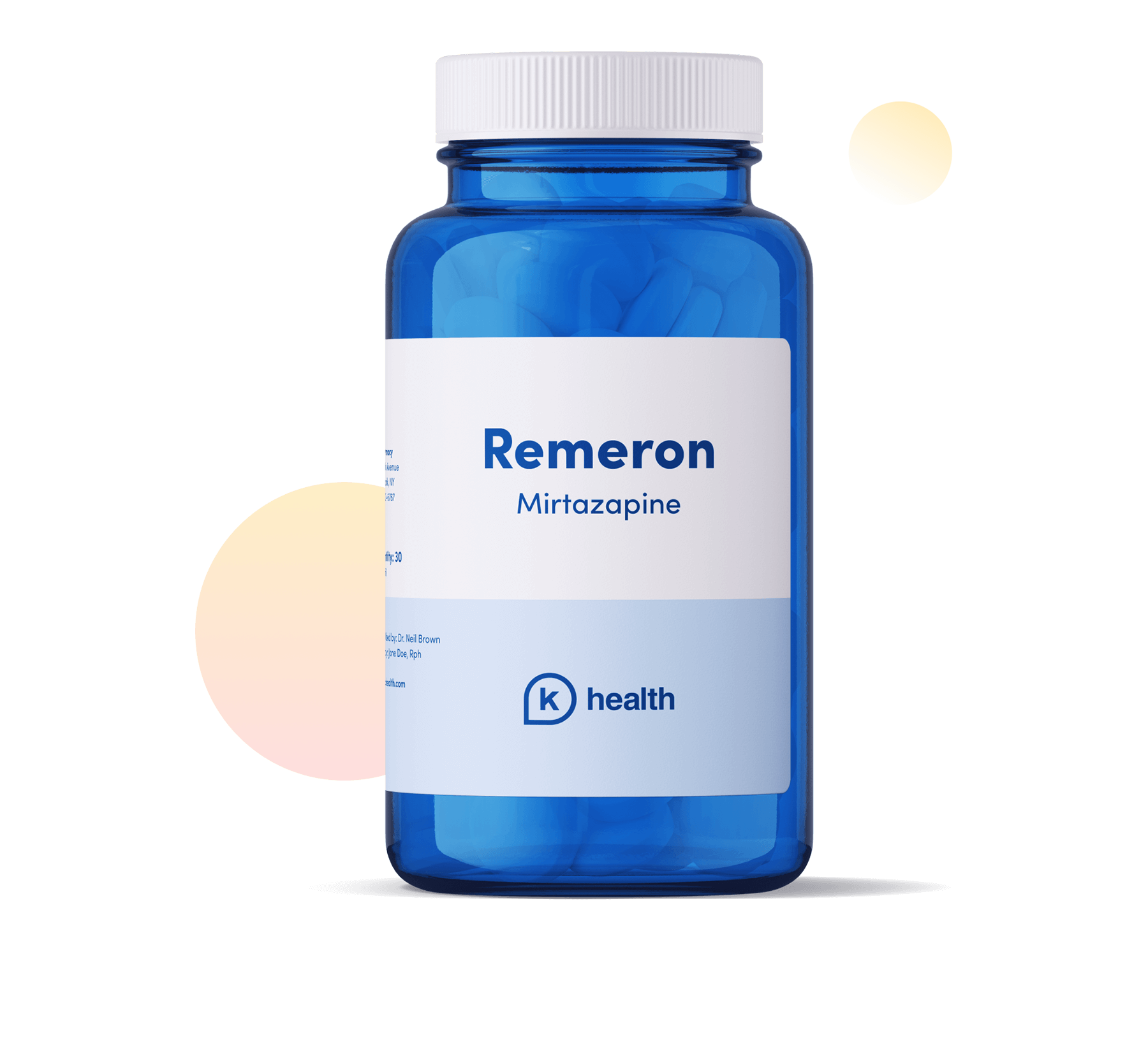 Feel better for only $49/month

Tell us about your symptoms and medical history. We’ll let you know right away if the program could work for you.

Text with a doctor

Our text-based program puts doctors on your schedule. Get in touch whenever you want, from the privacy of home.

Get treatment shipped to you

If medication is prescribed, get it shipped directly to your door for free or pick it up from your local pharmacy.

Available in all 48 continental US states. Not available in Alaska or Hawaii.

Why choose treatment with K Health. 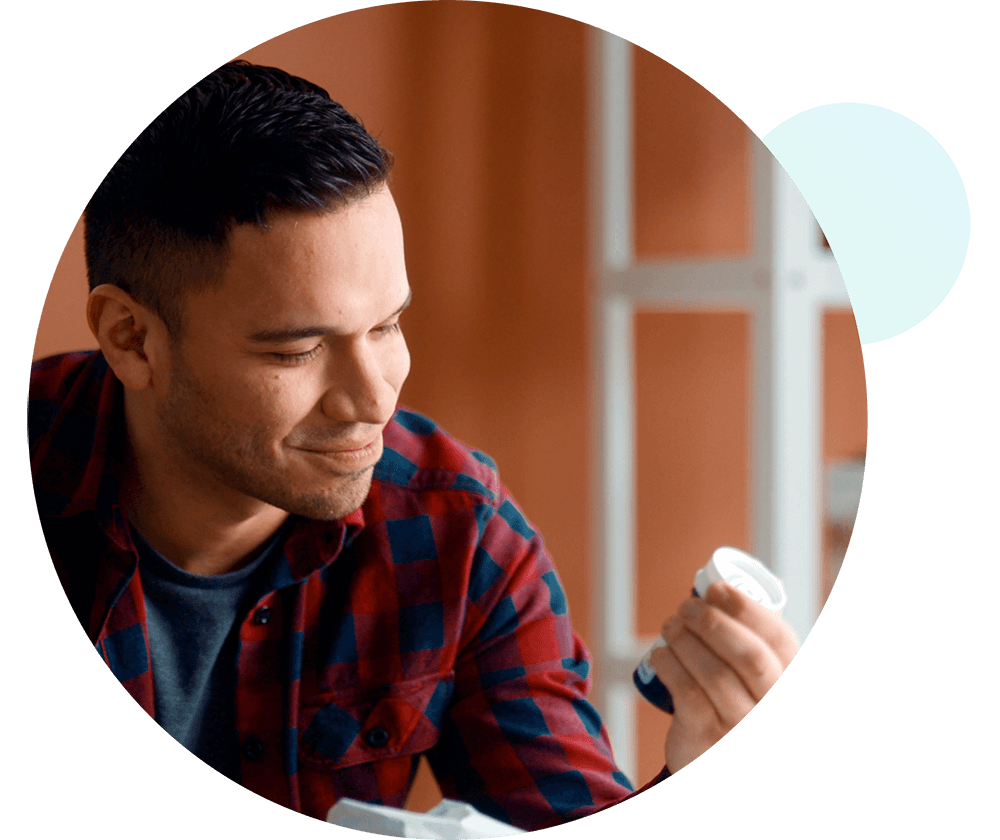 Mirtazapine is an atypical antidepressant medication that was approved by the FDA f in 1996 for the treatment of major depressive disorder.

Do you need a prescription for mirtazapine?

Mirtazapine and its brand name forms are only available by prescription.

Mirtazapine may not be right for everyone. Some patients might be at risk for serious side effects if they begin to use the medication without being under the consistent supervision of a medical professional.

If you believe you might benefit from taking mirtazapine, talk to a licensed medical provider. Your provider will evaluate your medical history, discuss your symptoms, and, if appropriate, prescribe you the medication.

In many cases, your provider may first recommend starting treatment for your depression with a selective serotonin reuptake inhibitor, or SSRI, before trying mirtazapine or another atypical antidepressant.

How does mirtazapine work?

Mirtazapine works by changing the neurochemistry in your brain. Specifically, it works to increase two neurotransmitters: serotonin and norepinephrine.

The brain uses neurotransmitters, including serotonin and norepinephrine, to help deliver messages between nerve cells in your brain and other parts of the body. These neurotransmitters play an important role in many bodily processes.

For example, experts believe that serotonin helps to influence learning, memory, happiness, and digestion as well as helping to regulate sleep and sexual behavior. While norepinephrine is believed to help you manage stress and anxiety and also have an influence on how you sleep.

Under typical circumstances, your brain regulates the amount of dopamine and serotonin and other neurotransmitters in the body. Having too much or too little of either neurotransmitter can cause physical and psychological symptoms, including depression.

Unlike many antidepressants, including selective serotonin reuptake inhibitors (SSRIs), mirtazapine does not work by blocking the reabsorption and recycling of serotonin, dopamine, or norepinephrine. Instead, mirtazapine is believed to work by inhibiting the central presynaptic alpha-2-adrenergic receptors which causes an increased release of serotonin and norepinephrine.

How long does it take for mirtazapine to work?

When treating depression or other mental health conditions with Mirtazapine, it may take some time for patients to feel the full effects of the medication.

Specifically, it can take between four and eight weeks for mirtazapine to make a difference in a patient’s mood and outlook, though some may experience physical improvements, like benefits to their sleep and appetite, a little earlier.

If you’re currently taking mirtazapine and are worried that it isn’t helping your symptoms of depression, talk to your provider before discontinuing the medication. If you stop taking your medication abruptly, you may develop discontinuation syndrome, an uncomfortable set of withdrawal symptoms which can include irritability, anxiety, dizziness, upset stomach, excessive sweating, trouble balancing, sleep changes, tremors, and suicidal thoughts.

Is there a generic for mirtazapine?

It is also available as a brand-name prescription medication under the name Remeron. Like mirtazapine, Remeron is only available by prescription.

To meet FDA standards, the generic form of any medication must be “bioequivalent” to the brand-name version of the drug.

It must have the same active ingredients, be available at the exact dosage, and be equally effective at treating the medical condition for which it is intended.

A generic medication is often sold at a lower price. Purchasing generics can be a way to reduce prescription drug costs.

Mirtazapine can cause side effects. The most common side effects (occuring in greater than 10% of the people taking mirtazapine) include:

A smaller portion of the patient population may experience more rare but severe side effects, like:

If you experience any of these more severe side effects, seek emergency care as soon as possible.

Mirtazapine carries an important boxed safety warning on the label that all prospective patients should be aware:

Suicidality and Antidepressant Drugs Antidepressants increased the risk compared to placebo of suicidal thinking and behavior (suicidality) in children, adolescents, and young adults in short-term studies of major depressive disorder (MDD) and other psychiatric disorders. Anyone considering the use of REMERON® (mirtazapine) Tablets or any other antidepressant in a child, adolescent, or young adult must balance this risk with the clinical need. Short-term studies did not show an increase in the risk of suicidality with antidepressants compared to placebo in adults beyond age 24; there was a reduction in risk with antidepressants compared to placebo in adults aged 65 and older. Depression and certain other psychiatric disorders are themselves associated with increases in the risk of suicide. Patients of all ages who are started on antidepressant therapy should be monitored appropriately and observed closely for clinical worsening, suicidality, or unusual changes in behavior. Families and caregivers should be advised of the need for close observation and communication with the prescriber. REMERON is not approved for use in pediatric patients.

It’s important to follow the instructions on the medication label as closely as possible and to follow any instructions given by your pharmacist or provider when taking mirtazapine.

There are several medications that can have an interaction with mirtazapine.

This is why it’s very important to talk to your provider about any prescriptions, over-the-counter supplements, or other drugs you might be taking to avoid harmful drug interactions.

A few common medications that can interact poorly with mirtazapine include:

The cost of mirtazapine can vary depending on an individual’s dosage strength, insurance coverage, and local pharmacy.

If you are concerned about keeping drug costs low, shopping online for your medical treatments is an easy and convenient way to get your prescriptions at the lowest price.

Is mirtazapine right for you?

If you’re suffering from depression, there are antidepressants that can help. Talk to your provider about your options and whether mirtazapine or another antidepressant medication may be right for you.

Warning: Some patients may experience suicidal thoughts upon taking their first dosage of Mirtazapine. There is an increased risk of suicidal thinking and behavior in children, adolescents, and young adults taking antidepressants.

I have many health issues and no health insurance, so I frequently need urgent care. K Health has been my favorite online service so far because you don’t have to do a phone call or video call – it is all text based. As someone with social anxiety this is a wonderful feature. I have used the service twice now and both times I have been helped quickly and efficiently. I recommend this to anyone who needs quick urgent care for a minor illness.

Gave me my life back

I can not afford insurance, so I could not afford to see a doctor about my anxiety and panic attacks before finding K Health. I literally hid at home all the time and had massive panic attacks resulting in trips to the ER over basic stuff like grocery shopping. Now I actually look forward to getting out. I’ve developed hobbies that have turned into a home business and actually made a few friends. K Health literally saved me from myself. Thank you!!!

I’m on medication for anxiety but have a high co pay for my regular PCP. This saves me money and time!

Works around my busy schedule

Easy way to get my anxiety medication from professionals. Their mail option for my meds is cheaper and faster than waiting in line at pharmacies like Walgreens too. I haven’t had to wait longer than 5 mins to talk to a doctor! Awesome!

I am a homeless disabled 70 yr old who lost my secondary healthcare. I have been able to continue receiving compassionate therapeutic listening to my stressful situation and receive monthly prescriptions of my antidepressants that I have been on since the 1990’s.

I lost my insurance but didn’t want to lose all the progress I made and was at a point of feeling better. I’m able to speak to a psychiatrist once a month and get my prescription refilled that I already know works for me for a low cost.

For my depression/anxiety they were receptive to input on what worked before and helped me find a dose that works.

Absolutely life changing for me! Thank you for creating a great app to help people like me who cant afford expensive trips to the doctors. Mental health is so important and this makes it so easy to get the meds I need.

Absolutely amazing. They are helping me greatly with my anxiety and stress and panic attacks. Great, great doctors as well.

So happy I tried this app

These doctors have been so helpful and nice. I have saved so much money on doctors & hospital bills. My heart, wallet, and credit thank y’all for everything y’all have done.

I really like this app. Affordable price and gets what I need ASAP. Just got my refill for my anxiety and it’s been awesome. My life has changed for the better. Recommend to anyone!

Can Mirtazapine Be Used For Sleep?

Mirtazapine is a tetracyclic antidepressant that is approved by the U.S. Food and Drug Administration (FDA) to help treat major depressive disorder (MDD). The medication has sleep-promoting side effects, and may be prescribed off-label for insomnia. If you have been prescribed mirtazapine, you might want to ask your healthcare provider about its sleep benefits, In […]

Mirtazapine Weight Gain: What You Should Know

Mirtazapine is an antidepressant approved by the U.S. Food and Drug Administration (FDA) for treating major depressive disorder (MDD), sometimes called clinical depression. While it may help treat depression, mirtazapine can come with a side effect that some patients find distressing: weight gain. Two of the most common side effects of mirtazapine are increased appetite […]

Side Effects of Antidepressants

Antidepressants are medicines used to treat depression, a mental health condition that causes prolonged feelings of sadness and hopelessness. While depression is most often associated with emotions, it can also have physical effects, including headaches, digestive problems, and aches and pains.  The medication your doctor prescribes will depend on the severity of your symptoms and […]

Everything You Should Know About Antidepressants and Alcohol

An estimated 3.8% of the worldwide population is affected by depression. This particular mental health condition can cause prolonged feelings of sadness, hopelessness, and guilt, and interfere with daily life. It can also cause symptoms of apathy toward previously enjoyable activities, difficulty making decisions, physical issues, and thoughts of self-harm and suicide. To help treat […] 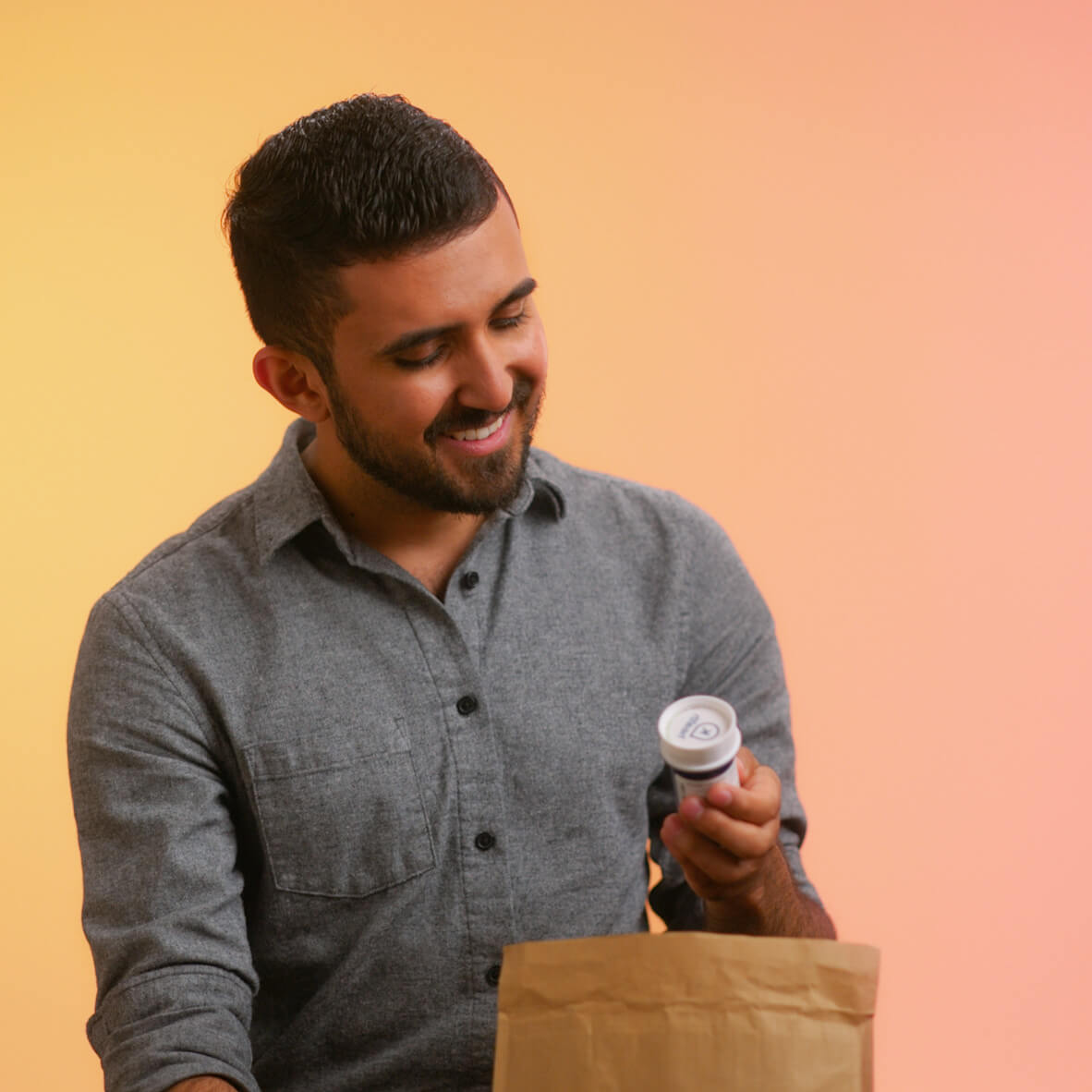 Get Mirtazapine online for only $49/month

Medication is prescribed at your doctor’s discretion. We don’t prescribe controlled substances like Xanax, and we don’t treat conditions like severe depression remotely.