Chronic fatigue syndrome (CFS), also called myalgic encephalomyelitis (ME), causes overwhelming fatigue that is not improved by sleep or rest.

It’s estimated that  836,000 to 2.5 million Americans have this complex, chronic illness, though as many as 90% of them have not been diagnosed.

Some people with ME/CFS may outwardly appear to be in good health.

But that doesn’t mean they are not sick.

There is no specific test for diagnosing ME/CFS, but researchers have found many ways in which the bodies of people with ME/CFS function differently from their peers.

In this article, I’ll discuss what it’s like to have ME/CFS, as well as identify who is at risk for the disease.

I’ll outline the research about the causes of chronic fatigue syndrome, as well as its most common symptoms.

I’ll talk about how doctors and healthcare providers diagnose ME/CFS, and provide an overview of the most up-to-date treatment approaches, including medication, lifestyle changes, and alternative medicine.

I’ll discuss whether it’s possible to prevent ME/CFS, and the major complications that accompany the illness.

Finally, I’ll review what we know about the long-term outlook for people with ME/CFS, and when to talk to your doctor about this disease.

Concerned about fatigue? Chat with a provider through K Health.

What is Chronic Fatigue Syndrome?

Chronic fatigue syndrome is characterized by extreme fatigue that can’t be explained by a patient’s other underlying medical conditions.

This fatigue does not improve with rest.

And it can get worse after any physical or mental activity.

More than 1 in 10 Americans say they regularly feel tired or exhausted.

People with ME/CFS, however, often experience fatigue in some of its most extreme, long-lasting, and hard-to-pinpoint forms.

Daily tasks that many of us take for granted, such as taking a shower or shopping for groceries, can leave people with ME/CFS with debilitating fatigue for days.

For years, doctors thought of ME/CFS as an especially “invisible” or elusive illness to identify.

However, CFS is not an ailment that is “all in people’s heads.”

While there is still no one single test that can identify ME/CFS, researchers have begun to identify many key differences in the bodies of people with ME/CFS.

Research suggests that many people with ME/CFS have different patterns of metabolism and autoimmune response than non-sufferers.

(Chemicals called cytokines are an important part of this autoimmune response, and are known to cause inflammation—perhaps leading to increased fatigue.)

ME/CFS sufferers also may display distinct imbalances in systems that manage serotonin, an important brain chemical, and antioxidants, substances that protect against inflammation.

ME/CFS patients also seem to suffer from circulatory problems that lead to lower levels of oxygen delivery and a depletion of energy nutrients.

The gut microbiome of people with ME/CFS is also markedly different from those without the disease, which could affect how the gut and brain systems interact.

For all of these examples, it is currently unclear if these differences are a cause or a consequence of ME/CFS.

But they are clear signs of the disease’s far reach throughout the body.

Who is at risk for chronic fatigue syndrome?

Chronic fatigue syndrome is most common in people between 40 and 60 years old, but it can occur in kids, teenagers, and adults of all ages.

ME/CFS also affects all genders, though women are currently 2-4 times more likely to be diagnosed with ME/CFS.

Much about the causes of chronic fatigue syndrome have yet to be understood.

Researchers are holding out the possibility that ME/CFS arises as the result of several interacting triggers, which may include:

Some people with ME/CFS report that the illness began following a period of great physical stress, such as surgery.

Others say their illness started after a flu-like illness, cold, or stomach bug.

Research has shown around 10% of people who develop certain infections–such as Epstein-Barr virus, Q fever, and epidemic polyarthritis—are later diagnosed with ME/CFS.

Many of these infections affect the central nervous system.

None of these explanations currently encompass all people diagnosed with ME/CFS.

This is one reason researchers suspect it may be triggered by a variety of factors.

There is no one set of symptoms that is shared by all sufferers of chronic fatigue syndrome.

Even with a single patient, symptoms may come and go.

Some of the most common ME/CFS symptoms include:

Less common symptoms of ME/CFS include:

ME/CFS cannot be diagnosed with a single test.

Instead, your doctor will need to perform a thorough physical and mental evaluation, and may order laboratory tests and specialist consultations, all in order to eliminate other conditions with similar symptoms.

While performing these evaluations, your doctor will check the results against a new definition of ME/CFS that was released in 2015.

Three “core” or primary symptoms are now needed for diagnosis:

In addition, one of the following two symptoms is required for diagnosis:

ME/CFS currently has no cure. Most treatments are focused on relieving symptoms.

These treatment approaches should only occur under your healthcare provider’s supervision.

Some treatments that are sold as cures for CFS are unproven and even dangerous, so always talk to your doctor before trying something new.

Lifestyle changes to manage the symptoms of ME/CFS can be put in place at home and at work.

About half of all people with ME/CFS work a part-time or full-time job.

Many of these people can benefit from adjustments like more flexible schedules, rest areas, and memory aids on the job.

At home, “activity management” approaches can help you learn to pace your activities and avoid a “push hard and crash” cycle that leads to post-exertional malaise.

You can also work with a physical therapist to learn lower-impact ways of doing daily tasks, and with a mental health counselor to process the difficulties of living with ME/CFS.

More research needs to be done on the role of anti-inflammatory diets in managing ME/CFS symptoms.

Attempts to treat or cure ME/CFS directly with medication have not yet succeeded, or are still in early stages.

But  medication can be useful in managing symptoms for some people with ME/CFC:

The main goal of alternative medicine is primarily to alleviate symptoms, rather than cure ME/CFS.

Approaches like meditation, yoga, and tai chi can reduce anxiety and promote feelings of well-being.

Acupuncture, massage, and water therapy may help with pain management.

Research on natural supplements like magnesium, melatonin, vitamin B12, and coenzyme Q10 has not yet yielded clear evidence of these remedies’ effectiveness.

Most people who develop chronic fatigue syndrome were generally healthy and active prior to falling ill.

As the exact causes of ME/CFS are not yet known, there is currently no protocol on how to prevent its emergence.

Some people with chronic fatigue syndrome also experience depression, stress, and anxiety related to their diagnosis.

Although ME/CFS is not a psychological condition, the unpredictability and discomfort surrounding the disease can prove stressful and demoralizing.

People with ME/CFS may also be diagnosed with additional disease comorbidities.

Some people with ME/CFS recover over time, even approaching a “full” recovery.

There is some evidence that children and young people with ME/CFS may have higher rates of recovery.

Other people may grow progressively worse with time.

Concerned about fatigue? Chat with a provider through K Health.

One of the most important factors in managing ME/CFS, and maximizing quality of life, is building a strong relationship with an experienced medical provider.

This is a process that starts with getting a diagnosis—something many people with ME/CFS unfortunately never receive.

Talk to your doctor if you begin to experience extended periods of severe fatigue that cannot be improved by rest.

Let your doctor know if you begin to experience memory and concentration problems, or start to have trouble holding your body upright.

If you already have an ME/CFS diagnosis, talk with your doctor before trying any new symptom management tools, medications, supplements, or alternative medicines.

Some supposed “cures” can do more harm than good, or conflict with an existing course of treatment. 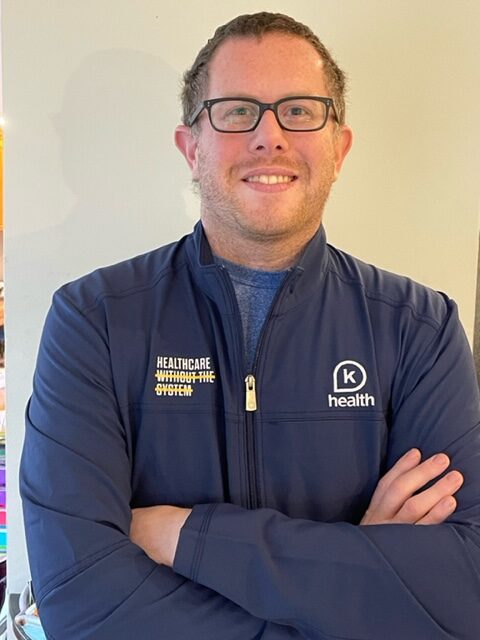 Craig Sorkin, DNP, APN is a board certified Family Nurse Practitioner with over 15 years experience. He received his Undergraduate and Graduate degrees from William Paterson University and his doctoral degree from Drexel University. He has spent his career working in the Emergency Room and Primary Care. The last 6 years of his career have been dedicated to the field of digital medicine. He has created departments geared towards this specialized practice as well as written blogs and a book about the topic.

If you’ve ever worked out vigorously, you’ve probably experienced muscle fatigue. As your exercise session progresses, actions you were once able to perform powerfully can suddenly become weaker and weaker—until your muscles cannot “fire” at all.  There is no one cause of muscle fatigue, and there are still things we are learning about the causes […]

What is Causing Fatigue After Eating?

Are you suffering from recurring bouts of drowsiness after eating? If it’s more than just the annual Thanksgiving Day turkey dinner crash and you’re experiencing fatigue after you eat on a regular basis, you may have postprandial somnolence. But what causes tiredness after meals, and how can you combat this common issue? In this article, […]

Can Anxiety Cause Fatigue?

Anxiety can be overwhelming. Along with racing thoughts, you may experience physical symptoms like a rapid heartbeat, muscle tension, or difficulty sleeping. For some people, anxiety can also result in fatigue. Although the link between fatigue and anxiety is a bit complex, this weariness is usually treatable with lifestyle changes, therapy, and sometimes medication. In […]

Many of the most common symptoms related to a monthly period are well-known: abdominal pain, cramping, bloating, and tender breasts. In addition, you may find yourself developing a strong craving for sweets, overindulging in unhealthy foods, or crying for no reason. Shortly before or during menstruation, you may also experience intense tiredness. Period fatigue is […]

Can Allergies Cause Fatigue?

If you suffer from allergies, you already know how frustrating it can be to deal with a runny nose, itchy eyes, and sneezing. But there’s another common symptom you may not associate with your allergies: fatigue.  Allergies can make you tired for several reasons, including from the allergic reaction itself. Other indirect factors, such as […]

Why Does My Body Ache? Causes & Treatment

Body aches are an uncomfortable but common symptom of a variety of medical ailments. If you’re experiencing body aches, your muscles may feel weak, sore, tired, or hard to move. For most, body aches are easily treatable—a few days of rest and hydration can provide relief from any discomfort. For some, body aches, particularly those […]

Why Do I Feel So Tired?

You may be asking yourself, “Why am I always tired? Why can’t I seem to get out of this low-energy fog?” First of all, you’re not alone. Fatigue is a common problem and can manifest as feeling tired physically and/or mentally. The Centers for Disease Control and Prevention (CDC) reports that about 15.3% of women […]